May 02, 2011
I am starting a series of posts inspired by Stay at Home Mum entitled 'My A to Z'  It's very simple - I plan to go through the alphabet and write a post for each letter on something personal to me.

There could only be one possible subject for the first letter.....


I would like to introduce you to Aaron, the hubby formally known as AJ. (in the blog world anyway!) 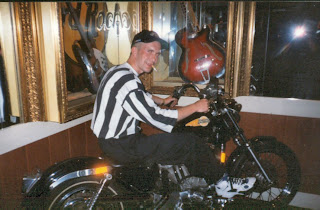 When I started blogging I did not ask Aaron how he felt about me writing about him so I used his initials in some random attempt for him not to be recognised.  I realise now that with the amount of photos and the fact that if you know me you'd know him it's all a bit pointless - also the first few months of blog posts I didn't expect anyone to read it and used him name anyway!


I met Aaron in 1995 in my old local pub, I'd like to tell you it was love at first sight but he was actually first brought to my attention by my friend with the comment 'Ooh look, he's got a nice arse'  (he was playing pool and bending over taking a shot at the time)  I shrugged and replied 'it's just an arse'      - oops!


Now in telling our story I'm going have to leave out a fair bit or I might just bring the whole interweb down with the length of it and some of it might not go down so well now. So I won't mention that my friend went out with him first (and then was my bridesmaid so we're all good don't worry!) or that we split up 2,/3/4?? times (I lost count!) I'll also leave out the part where he went to work in France for 6 months and I got rid of all his belongings, and I definitely won't talk about the time he buggered off to Cambridge and went AWOL for a week :) 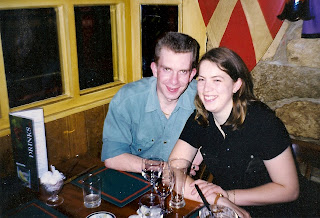 Oh yes... 1995. We got together, I was just about to turn 18. I loved the fact that I could take my boyfriend to my party and I was totally hammered infatuated . All was well for almost a year and then we entered what I now look back on as the fun part!

In brief...
- We split up
- We then moved into together -(yes I have written that in the correct order!)
- We lived together for a year as friends, very good friends but friends nonetheless :)
- We got back together
- We split up, he went to France and I moved out
- He came back, we were friends and I moved into my own flat. He came round a lot!
- We went to Cuba and Ibiza, just as friends ;)
- We got back together

In early 2003 we brought a house together and then in October Aaron proposed to me. We married in 2004.

Then when it seemed we were becoming a bit normal we brought an apartment in Cyprus, and then moved across the world with a 6 month old baby and no real plans!

I always had a feeling through all the years in the middle that we would eventually end up married, we were so rubbish at not being together even when we were not a couple we used to get joint invites to things and people often said they just assumed we were a couple.

Although looking back it's not always been good at the time  I'm glad that our relationship panned out like it has. I'm glad I got the chance to live on my own as it really made me learn I didn't need him, I wanted him - big difference! 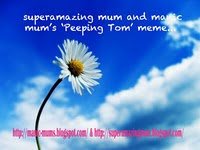