A couple of years ago I saw a friend on facebook had started following a yoga program on YouTube by Yoga With Adriene. Back in 2008 I used to go to Pilates classes weekly which I enjoyed and continued going to until I was about 7 months pregnant, I'd never managed to find any Pilates videos I liked online and as  I surmised that Yoga would be pretty similar so thought I'd give it a go too.

I like a program to follow, exact instructions if you like, I think it's why I've got on so well with Slimming World over the years so I was full of optimism as I started 30 Days of Yoga.

I can't remember how many days I did,  maybe 3?
I wanted to get fit and I had probably at least a couple of stone I wanted to lose and when I sat on the mat closing my eyes and holding my hands together over my heart I couldn't help but think 'I haven't got time for this s**t)   Meditation has never held any interest for me, my mind would wander too much and I'd be impatient to get up and do something.   I  felt like if I wanted to get fit I had to be moving a lot more!


A year or two before that I'd started Jillian Michael's 30 Day Shred, I made it to day 16 before I had to bow out due to back pain.

I've downloaded Couch to 5K before and stopped that after a minute or two of running and knee pain.

Back in the day when I first did Slimming World I did regularly exercise,  at least 3, usually 4 times a week (that was when I lost 4 stone - I'm guessing that's not a coincidence!)   and while I have jumped into doing it occasionally since then I've never kept it up for more than a couple of months.


After re-joining Slimming World last year I started working towards the Body Magic awards and have kept it up since, I go to a class once a week and most other days do something at home via YouTube, but I have no real plan, I just pick something I fancy on that day.

As I said, I do like a plan so maybe that's why Dedicate caught my eye on New Years Day this year. 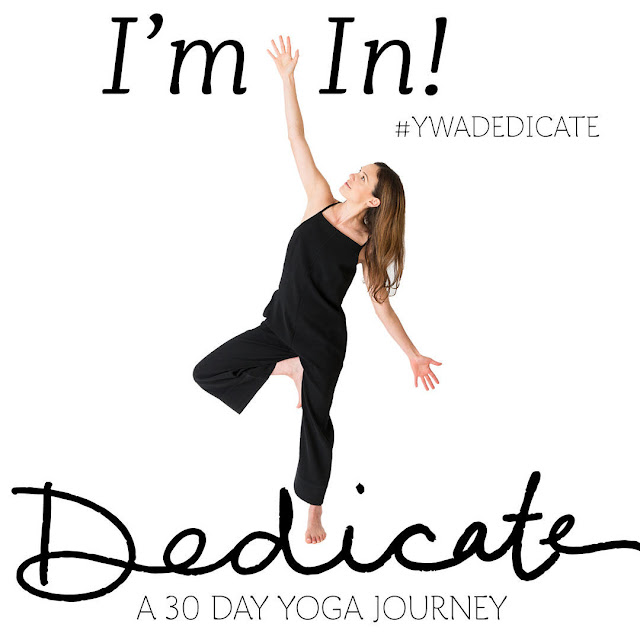 I was snuggled on the sofa in my pyjamas, (not hungover I might point out!) under my big fluffy blanket with the boys flicking through YouTube when it suggested 'I might also like' Day 0 Dedicate'

It was 4 minutes long so I thought I'd watch, and it is an introduction to the 30 Day Yoga Journey that was to start the following day.

Maybe it was fate - maybe it was the fact it started on January 2nd and not the 1st (I've always said the year officially starts then!)  but I decided to do it.

I kept reasonably quiet about it as I assumed I wouldn't see it through to the end for whatever reason, or at least I wouldn't be able to do it EVERY day and keep up with the videos, but I printed off the calendar, stuck it to the wall and rolled out my yoga mat the following day.

The first video was 50 minutes, I was nearly put off right there - I wouldn't be able to do that much every day,  but just before turning it off I thought I'd give it a go - after all what else did I have to do on a rainy holiday day.

I looked at the times of the other days and realised that was a one off and most days came in around 20 - 25 minutes.


So off we went, every day, grabbing my mat and just getting on with it.  It wasn't always easy but I managed most of the poses, for most of the time, occasionally easing out of them a little early.  I got a cold halfway through the month and wondered if I should have a day or two off but decided to try and felt better each time for doing it.

Mostly I did it in the morning, straight after the school run, sometimes in the afternoon and sometimes just before bed when I realised I'd not done that day's workout. Some days were peaceful with just me and some days the boys were making a racket or Aaron was cooking dinner a few feet away, but I just tried to ignore them all!

And on Thursday, along with thousands of people around the world I completed Day 30!


I am amazed, not only that I completed it, but that I did it in the 30 days and most importantly I really enjoyed it, and can definitely notice an improvement in how I feel.

I haven't yet decided where I go from here,  I have the February calendar and have done day 1, but may switch to another 30 day program.   I would like to add in some other workouts to change it up a bit but have a tendency to hurt myself, yesterday I tried a 15 minute HIIT workout and today my right knee is very sore and I cannot lift my arms!