- January 26, 2013
Back in July when I was still waddling around with my big baby bump my friend Sam threw a lovely Baby Shower for me. So when she announced that she was also expecting a baby my mind turned to making plans to return the compliment.

Sam found out she was having a little boy so I had my colour scheme sorted but I was trying to think of what else I could do to make it special.  One day while changing Louka it came to me in a flash of inspiration.... 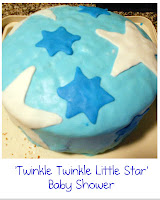 Louka was wearing a star patterned babygrow and I happened to think that I'd have to keep that one for Sam as she loves anything and everything Starry. (well, and skulls but that's a much harder theme to work with!)

So our 'Twinkle Twinkle Little Star Baby shower was conceived.....

With a fantastic whip round from the girls, we had a fantastic amount of presents for Sam and the baby.  A play mat and arch as the main gift along with a whole host of 'baby essentials' - wipes, nappies, toiletries etc.  I also created a 'Birth Day' Kit using an idea I'd seen on Pinterest, with little goodies just for Sam to take to hospital - paracetamol, a notebook and pen, lip balm and face wipes among others

Mum and I spent an evening covering boxes and arranging all the goodies, Aaron made a poster with the meaning of the baby's name which we framed for the centre of the table.  We decorated the room with blue tinsel, balloons and a home made banner reading 'Twinkle Twinkle Little Star'

I made a 'cake, sponge with fondant icing to match the theme and iced star shaped cookies for everyone to take home. 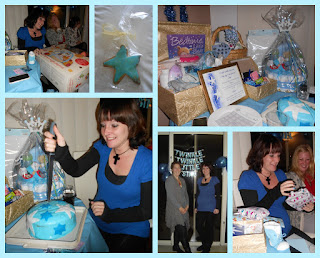 Knowing that many people do not enjoy lots of the 'typical' baby shower games as they often have a tendency to be naff I tried to find a line between doing nothing and being tacky.  In the end we played 'Star Bingo',   a fairly quick game using star phrases rather than numbers. (Wish upon a Star, Shooting Star, Star Bright and so on)

I also made a 'Name meaning Game'  where you had to match the meanings to the list of names.  I previously had looked up the meanings of all the names of the people who would be there and printed them out ready.

At Sam's request we also played the 'Guess the bump size game' that we played at mine. Each player takes a length of toilet paper they estimate to fit round the bump, closest wins.  I wish I'd noted what mine had been but Sam was 8 sheets!

Everyone seemed to have a great night, it was lovely to meet up with the girls without all the children (there are quite a few between us all) and actually have a proper conversation. I loved all the planning and organising of the evening and Sam really enjoyed herself so it was more than worthwhile.
baby shower celebration friends party