- May 15, 2012
Now I'm back to being at home on my own with Leo each day I'm always trying to come up with new and interesting things to do, not just for Leo but for me too - there are only so many times you can watch 'Thomas' or read the same book over and over before you go mad!

After the success of the 'Alphabet book' I came up with another idea, not sure where this one come from either or where I've suddenly got inspiration from but I hope it continues! 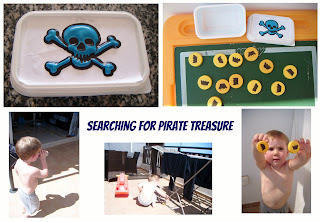 After saving milk bottle tops along with various containers for a while now (randomly saving them until I thought of a good idea!)  one morning I suddenly decided to make a fun game to play.   Leo and I had recently read a book called 'Pirates Ahoy'  (which I really dislike and am hoping he goes off soon!) and now he keeps talking about pirates and treasure, and goes around the place with an empty toilet roll 'looking for clues'

So came the idea of 'The Pirate Treasure Game'

Then I hid all the coins around the balcony and set him off to search for them all.

I told him there were 12 in total so he kept stopping to count them to see if he had got them all. So we even  (not intentionally I might add!) got some maths learning in there by asking him how many more he needed to find to make 12 etc.

The game was a surprise hit and we've been playing it over and over again!