Two weeks ago I celebrated my 33rd birthday, even though a couple of months ago I had been convinced that I was coming up to my 32nd  (I blame being pregnant and not drinking on my 31st, I think maybe that meant it didn't count as a birthday!)

I always like to celebrate a birthday in style....so along with a few friends we decided to go out on the town in Agia Napa. Being "Napa" we thought it would be fun to dress up just to help the celebrations along.
We started off in a karaoke pub, Sam (the one in purple) is a HUGE karaoke fan and is a bloody good singer. I couldn't even tell you how many times she got up to sing, and that's through losing count as opposed to too much beer. I on the other hand would love karaoke if I could sing....or was quite drunk.......

I ruined sang "Like a Prayer" by Madonna. Spurred on by that success three of us then sang "Holiday". The highlight (for me, maybe not the other people in the pub, but hey they're all be home by now) was singing "Hold On" by Wilson Philips, which is possible my all time favourite song. Not one I would have considered doing but good ol' Sam got up to do it and I got a bit over excited and joined her!
At some point, I guess about 1am we left the pub and went to Car Wash a club I have been waiting to go to for a very long time! In fact I wanted to go there that much it was even on my 101 list. From this point things do become a little hazy....there was drinking, singing, oh and some dancing on the bar! 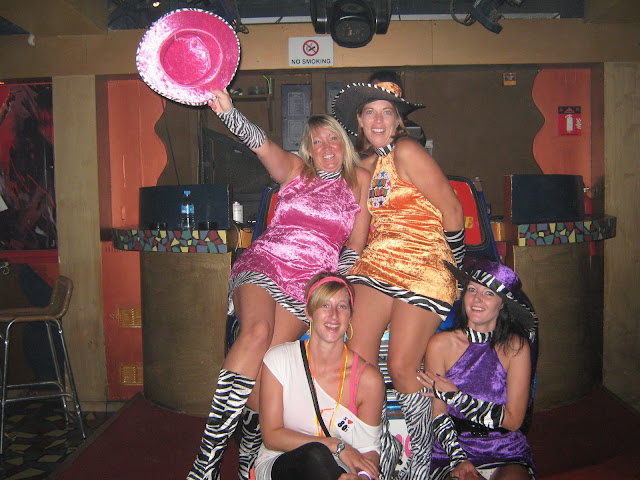 I'm not 100% sure if we left as it closed but I do know it was 5.30am when I got home! Luckily AJ was on Leo duty and I didn't actually surface until gone lunchtime. My actual birthday was on the Monday - as you might expect I had a very quiet day and not even a drop of alcohol. I may be another year older but wiser???  Not so much!

(It was worth every second of the hangover though!)