The one where I start again

For those of you who have been reading my blog for years you may well roll your eyes at this point and say yep, been there done that, and you would be right but I got to target (3 times!)  and stopped going, again.

Each time I was sure I would be fine, and of course the weight slowly crept back on, again!

You'd think by now that I would realise where I go wrong wouldn't you?

Well, maybe I have.

So, back in July I joined, again.  There were a few familiar faces from a few years back and I had been  before for a little while with the consultant but it was a new venue for me and I made a point of treating like a whole new start, I even read the book from cover to cover!

Like my original SW journey (Argh I hate that expression but can't think of a better description!)  this time my Dad has joined me, and like before he has powered through losing weight much faster than me, but that's fine, I'm very proud of how well he is doing.

I chose not to blog about it straight away,  just in case it all fizzled out and my motivation disappeared but now nearly 6 months in I think it's safe to say its going ok.

Aside from an epic gain in the summer*  the losses have been pretty consistent, although not amazing like before.  It's taking a bit longer than I'd like really,  several weeks where I've maintained or gained a little, and it doesn't always make sense but overall it's going in the right direction.

It seems harder this time to lose than it did first time round,  but things do change over the years. That was before I had the boys and more than 12 years ago now.  I was working in an office and the only food I had access to during the day was the things I had planned and brought in with me - no children's leftover to tempt me!

I've lost just over a stone so far in 20 weeks, and maybe more importantly, have been regularly exercising this time, which I'm sure is the secret to actually keeping it off, as well as not feeling like crap all the time! 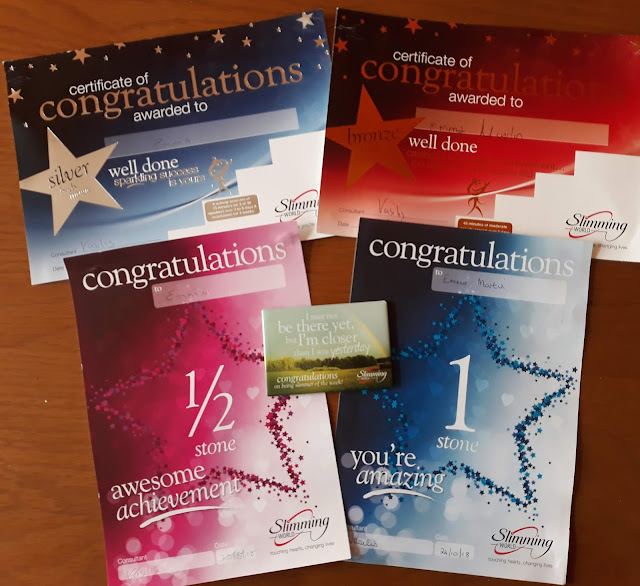 Over the years I have realised that the real trick to losing weight with SW (and probably other methods but I don't know or care about those!) is first getting your head in gear and then getting on with it,  when you get to that point there are some weeks where it is easy - follow the plan exactly, do plenty of exercise and lose pounds,   and then there are some weeks where it seems ridiculously hard for no real reason.

Last week I was expecting at least a 2lb loss, I was gobsmacked to see I'd stayed the same. I was a bit down about it, frustrated as I wanted to get my 1.5 stone award before Christmas and it was looking less likely, I thought about bringing my target much closer so I could stop quicker.

I couldn't stay to group last week as we were off to Paphos for work, but a nice comment from my old consultant in the UK stuck in my mind all week and I kept plodding on.

Thank you Martyn, it worked and this week I was pleased to see a 2.5lb loss which meant I finally dropped a digit too and am now just 4lb away from my 1.5 stone award with 3 weigh ins until Christmas, that's got to be doable!


*5lb in one week  after our holiday which wasn't actually even a holiday, but I did lose it all the following week!


I'm linking this up to Mummy From the Heart's Reason's to be Cheerful as I've been promising myself for months to join in again, and whilst it's not a list I'm very cheerful about it!  I will try to write a proper list very soon!