January 18, 2018
Facebook drives me mad a lot of the time, not mad enough to not live on it constantly of course (It's not that I *want* too, I HAVE to because of my work, well that and I'm far too nosy not to!)  It's full of rubbish a lot of the time, but also lots of little gems, funny things and random links that are a major time suck but so addictive. 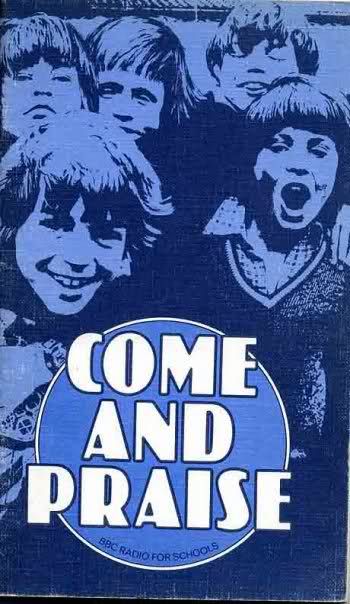 We used this book every morning in assembly throughout my primary school years. They were kept in a box and handed out at the door as we left the classroom to go to the 'Big Hall' for assembly.  There were many very battered copies in the box and a few brand new shiny ones. It was always a bit of a 'thing' to get one of the new ones!

I searched for 'Come and Praise' on youtube and was instantly transported back to those days,  sat cross-legged on the floor, or in later years having the privilege of sitting on actual chairs at the back of the hall - in the 4th year (year 6 for all you young ones out there!)  or in the 3rd year when the older ones were out.   Listening to whichever teacher was playing the piano to accompany our dulcet tones.

(Do schools still have pianos?  I'm guessing not,  maybe an ipod?!)

We never sung all of the hymns in there, I remember different teachers used to have their own favourites and you could usually guess which one we'd be singing by who was taking assembly.

I loved singing along with my favourites until I realised it was more 'cool' not to sing, and then instead you'd just mumble along, enough to not get told off for not singing if spotted by a teacher!

We never thought about the words particularly (well, not always but more on that in a moment) and it would possibly be too religious for schools these days?  I have no idea having nothing to do with UK primary schools since 1989!

I don't think our school wasn't a religious school as such, although thinking back we did have the local vicar come in quite often with his guitar!

Here are a few 'classics' that I came across on youtube,  I was surprised at how many of the words I could remember as they played.


One More Step Along The World I Go

Cross Over The Road


When I Needed a Neighbour

(I most remember everyone always sniggering at the line 'I was cold I was naked'   and I think in the end they actually told us we had to skip that verse, I have a feeling that everyone 'forgot' and in the end we were not allowed to sing this hymn!)

When a Knight Won His Spurs

When a Knight Won His Spurs in the stories of old
he was gentle and brave, he was gallant and bold
With a shield on his arm and a lance in his hand
For God and for valour he rode through the land.


My main memory of this is actually the poem by Allan Ahlberg which went to the same tune and changed out some of the lyrics to a teacher interupting her singing to tell off the class.

When a Knight Won His Spurs in the stories of old, he was 'FACE THE FRONT DAVID BRIGGS, WHAT HAVE YOU BEEN TOLD'

Give Me Oil In My Lamp


I remember everyone singing the 'Sing Hosan -NA' bits really loudly and stressing the ending, antoher thing that drove the teachers mad!

Of course there were more,
Morning has Broken,  never did like that one much,
Lord of The Dance - can't remember how much I liked it at the time but I like it now!  I loved Michael Flatley's (he of the independantly flailing legs) Lord Of The Dance so they kind of changed it a lot for me.
Kumbayah My Lord - what does that even mean?!  (ok, just googled it, it means 'Come by Here)
and
All Things Bright and Beautiful

Were you a child of the 80s? Let me know your favourite or tell me any classics I missed!