Doctor Who Party - Fun and Games

- June 13, 2017
I loved preparing for Leo's Doctor Who party, and soon enough it was time for the party itself.  I'd been looking forward to it as much as Leo as it was going to be a small party.just his two best friends plus little brothers and seven adults - that's pretty good odds for a kids party,  it's nice not to be outnumbered by children!

As only my boys knew anything about Doctor Who - I thought I should explain a bit about who the Doctor is and I created a little story to take us through the games I had planned.

I gathered the kids together and sat them down to begin... 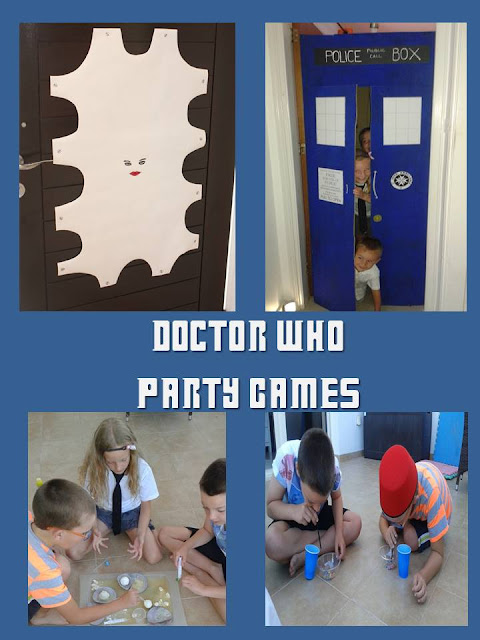 The Doctor is a Timelord, an alien with 2 hearts from the planet Gallifrey.  He travels through space and time in his blue box - the TARDIS (which is bigger on the inside) and his only weapon is his sonic screwdriver which can save the world in many different ways, except it doesn't work on wood,   oh and he sometimes has a spoon!

As a Timelord he can regenerate when he needs to and completely changes his look and character. Today, possibly due to the importance of Leo's 8th birthday there has been a shift in time and the Doctor is undergoing his latest regeneration,  as he recovers he will need your help defeating some aliens and repairing the time stream, otherwise you will find yourselves transported back through time to become babies again, eating mush, wearing nappies and demanding to be called 'Stormageddon, Dark Lord of All'

It was time for the first game...

I explained how the Plasmavores are a race of aliens who look like humans and use straws to suck the salt  from their prey (I thought it nicer than saying they suck blood from humans, due the to two 4 year olds!)   In this game they had to hide from the Plasmavores by sucking up the energy spheres (mini smarties)  and and making them believe they are one of them. 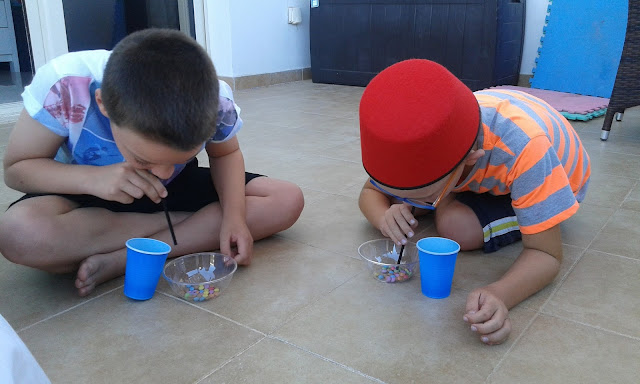 The Strands of Time

You must find a partner and try to keep your strand intact for the duration of the music, the pair with the longest strand at the end are the winners.

Each pair takes a single piece of uncooked spaghetti, holding in their mouth they must sway to the music without breaking it, if it breaks they start again with the same piece. The Weeping Angels are back, but you can defeat them!
Creep towards the angel without being seen and get close enough to touch them. Move towards them when they look away and freeze as they turn around.  If they see you moving you are turned to stone and out of the round. The player who touches the angel, becomes the next angel.

They loved this!   I started off the game by being the angel but after the first round they took over and played between themselves for ages,    while I snuck off and got myself a drink!

I'm sure this needs no explanation, if it does then you're best off just googling it!

Pin The Face on Cassandra

Cassandra is the last human from billions of years into the future, she no longer has a body and has to be constantly moisturized to stay alive.  The shift in time has damaged her and now she needs your help. 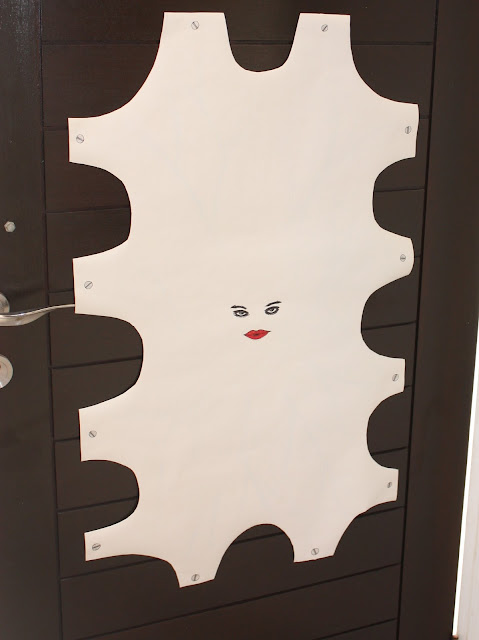 Aaron made the 'Cassandra' from a roll of lining paper and I gave the kids a piece of paper each to draw their own faces for her. 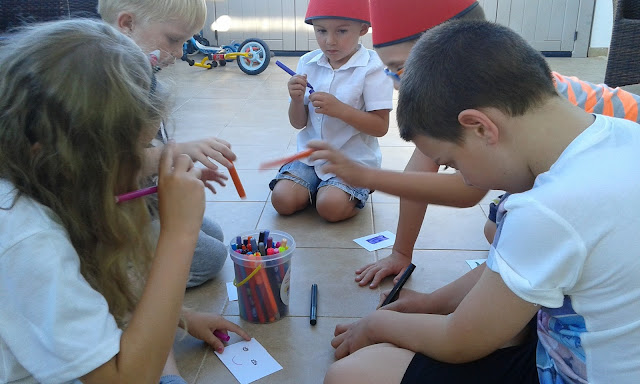 The Doctor found some unknown objects on a distant planet but has not been able to work out what they are yet.  Using the Lemonite Dissipater and Silteen Supresser you need to carefully investigat these mysterious orbs and find our their secrets. 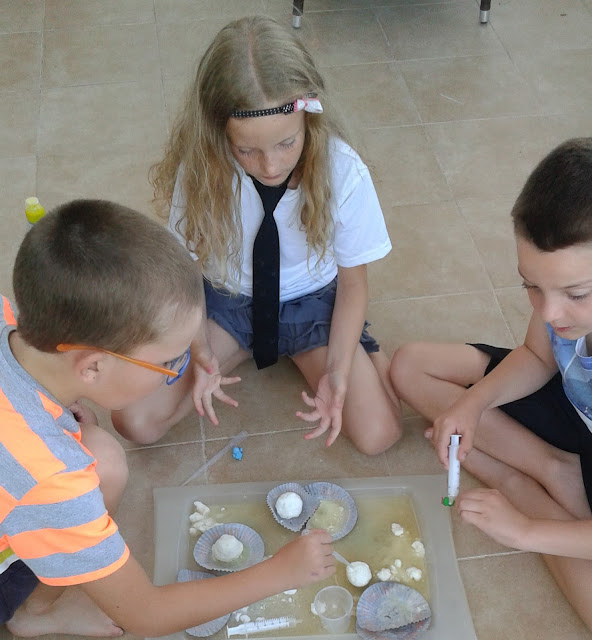 Using an idea from Tiny Acorns Creativity I used bicarbonate of soda mixed with a little water to create this game.   Hidden inside each ball was a tiny Pokemon figure.   The kids used lemon juice and white vinegar to dissolve the balls and discover the hidden objects.   It was quite messy but they loved it,  and were full of excitement as they realised they were Pokemon. 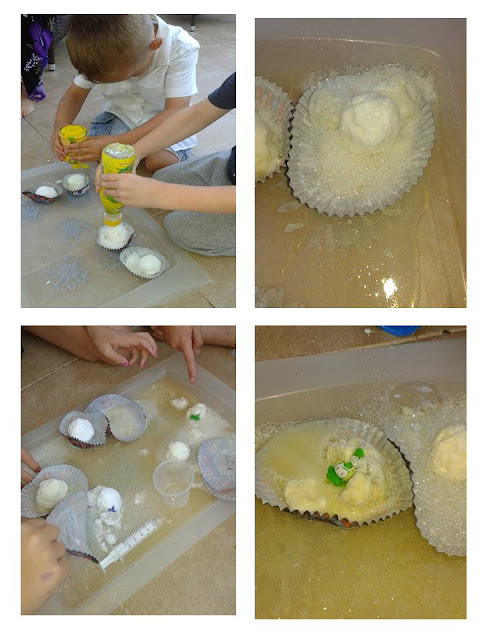 The TARDIS is malfunctioning and spinning madly through time and space.  As you take the parcel you must turn in a full circle before passing it to the next person. When the music stops, unwrap one layer and pass it on.

Again,  no explanation needed - it was pass the parcel with a twist!

The games were spread out over a few hours,  and we stopped mid way through for food.   Once we had finished them all I ended with the conclusion to the story.

When the Doctor regenerates his new look is always a surprise to him.  This time he seems to have taken on an unusual appearance,  maybe he's trying to tell himself something?  Maybe it's to do with the strange orbs he found?   Maybe it's because it's Leo's birthday?

He's still not ginger, he has legs (although a little shorter than usual) and he's not a girl.

I can show you a rare picture of him....

He is now Doctor Chu! 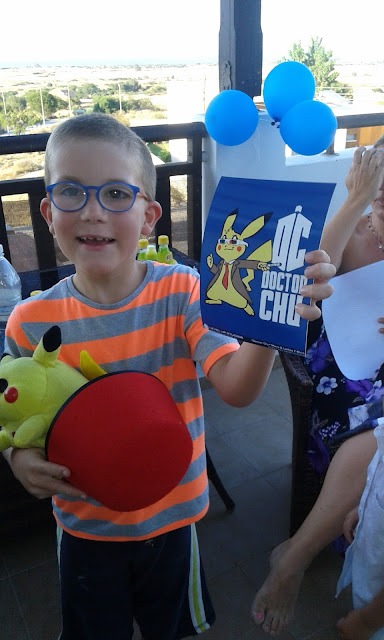 Leo roared with laughter as I gave him the picture,  and it went down very well!


For me the highlight had to be the TARDIS,  the kids loved going inside and pretending to be landing on different worlds but the best bit was when we made it come alive!   Watch till the end of the video below to see their reactions.

I put the party bags inside, while the kids were not looking and hid behind with my mobile phone playing the TARDIS landing noise.   It didn't take them long to work out what was happening but they loved it!.

You can read more about the party in my previous post - Doctor Who Party - Preparations, Decorations and Food.
birthday party Doctor Who party