A little bit of history for you... (thanks to Fatcatz Mobilty)

The word ‘Ochi’ simply means ‘No’. It is the word Greek Prime Minister Ioannis Metaxas used in 1940 to Mussolini’s spokesperson when asked if Axis forces could use Greek territory to gain access to areas of Europe not already occupied by Hitler and Mussolini. Metaxas stalwartly said ‘No!’
Prime Minister Metaxas had deliberately done his best to keep Greece neutral in the early months of World War II, but the ultimatum tipped any chance of allegiance and Greece became allied with Great Britain.
Prior to this, Metaxas may have decided to go either way. Personally, he had links with Germany based on his early education. He had also resisted Greece becoming involved with World War I and had refused to support the Allies in the Dardanelles Campaign.
The ultimatum changed everything and Greece turned out to be a strong force against the Germans and Italians, facilitating the Allies’ regaining of Albania.
Cities and towns across Cyprus and Greece celebrate Ochi Day with military parades that close down most centres. In Nicosia, Cyprus, school students and veterans march in a parade and carry banners and the flags of Cyprus and Greece. Political speeches are made and the day is focused on celebrating the heroes of the nation.
Cyprus particularly considers the day as one to not only remember the bravery of the people who walked in the past, but to focus on the future and to believe that their people can have strong and independent freedom and prosperity.


As the schools are closed on the day itself they hold their celebrations the day before.  As usual I had no idea what was being said in the school play,  but Leo really enjoys taking part in them and it means a lot to him when he sees us in the audience. 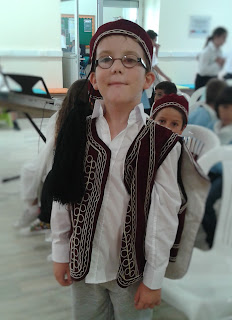 On the day itself I took the boys to see the parade in our local village for the first time,  despite being here for 7 years (and hearing them practise for weeks every year!) for various reasons we'd never got round to going to watch it. 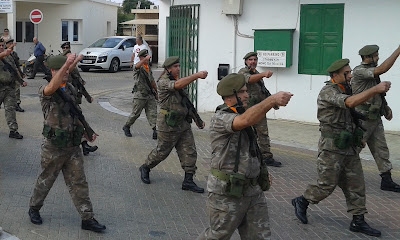 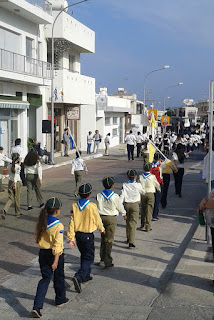 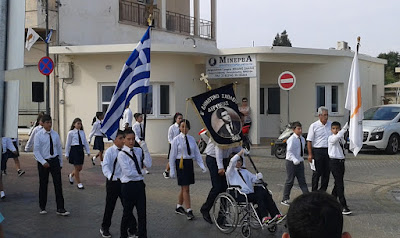 As the boys celebrate each year in school with plays and making Greek flags it was nice for them to see the parade too,  also being as it is a fairly small village they got to see plenty of people they knew, either marching or watching them go by.

(Video courtesy of 'My Journal on Cyprus')

The weather was still nice so I thought we'd make the most of the holiday day and head down to the beach for a while, as the summer season was about to come to an end we took the last opportunity to visit the tourist shops in Protaras and the boys spent their pocket money on some random plastic noisy toys. (angry birds spinning tops to be precise - rubbish but they loved them!)

The beach was quiet but there were several people in the sea,  my boys were wave jumping but it was too cold for them to want to go in properly,   I must admit I was laughing my head off at Leo's screams when I threw multiple buckets of water over him to wash off the sand after we'd buried him! 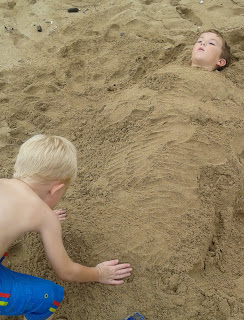 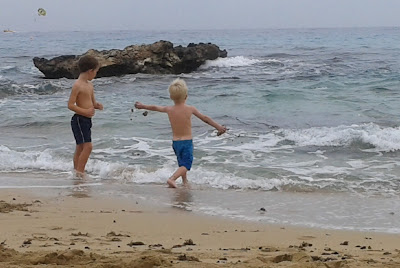 Even getting off the beach went well,  as we ducked into a nearby hotel and rinsed the sand off in the shower by the pool. The boys were also amazed to see the hotels fish and we stood watching them for ages. 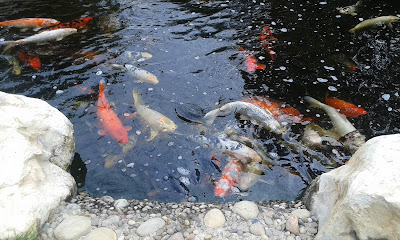 When we all started to get hungry I decided that as the day was going so well I'd treat us to lunch at our favourite restaurant. I'd never normally bother take them on my own, without Aaron or friends but I was feeling optimistic!

It was a good call,  the restaurant was rammed with people but we got a seat and I spent a good hour or so catching up with work on my phone while the boys played on the huge bouncy castle.   The food arrived, and they cleared their plates while we actually had an enjoyable conversation rather than a mealtime battle! 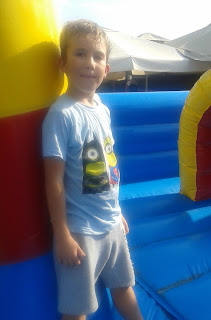 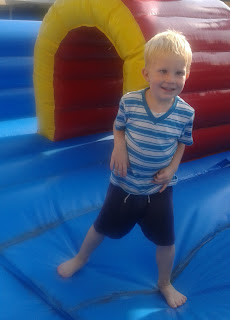 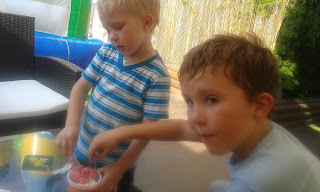 It went so well that we even ended up with ice cream before we left,  to come home for baths, pyjamas and a family film.  A slightly unexpected but pretty much a perfect day, it doesn't happen very often but as they are getting older it's starting to get easier to have days like this.    I told them both as they went to bed how pleased I was that they had been so good,    Leo told me it was the best 'Ochi day' ever and he couldn't wait for next year!

Ironically I hardly had to say 'No' all day!