- November 04, 2015
Halloween is now an official event in our family calendar, despite having never actually been to a Halloween party until 2010 its now something to be celebrated along with Christmas and Easter.  I love it, a chance to decorate and dress up and eat far too many sweets - what's not to enjoy! 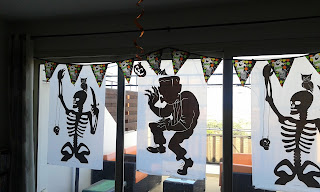 Since the afternoon that accidentally turned into a party a couple of years ago, I have enjoyed planning a treat for the boys so once again this year we invited a couple of friends over for a mini Halloween party. Held a day early on the 30th as we were going to be working over the whole weekend it meant that the fun began for the boys as soon as they finished school.

Leo was very excited about it, and I was probably more excited than I should have been! As always, for me the part I actually enjoy the most is the lead up to the event, so I loved Friday morning, tidying up, decorating with Aaron and preparing some spooky food and treats. 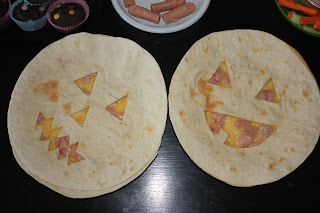 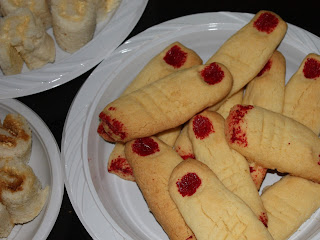 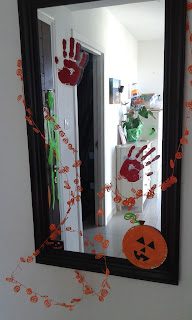 Knowing the boys would be impatient for their friends to arrive I presented them with a scavenger hunt when they got home, an unplanned idea that occurred to me about 5 minutes beforehand!  On a bit of orange paper (see, keeping it to the colour scheme!)  I quickly jotted down a list of things to find among the decorations..

A hanging bat. 6 pumpkin faces, 2 glowing skeletons, 6 spiders and so on.

It was a surprising hit, and kept them both happy, and working together for ages. So much so that Leo played it again when his friends arrived, calling out the things to find for them.

With the spooky music in the background playing (gotta love a youtube playlist!) and the food laid out we all started to eat when everyone arrived, the kids are a great age and spend quite a lot of time off on the big balcony amusing themselves,  interrupted only occasionally by the little ones falling over or the big ones moaning about them!

We played a couple of games - Pin the Nose on the Pumpkin, and a favourite from last year - Hanging Doughnuts, which as it turns out is ridiculously difficult! 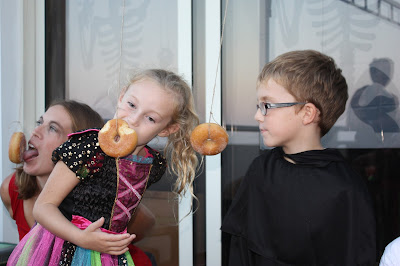 Of course the main event for the kids was the Trick or Treating, which I had planned with a few of the neighbours. I love the low key way we can do this here in Cyprus, and living in a small apartment complex, and we all trooped out to see what goodies we could find. 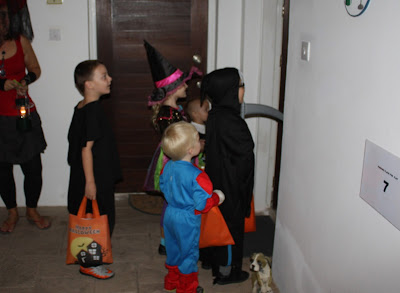 I had given each of them a Halloween bag, with some themed worksheets inside, an idea borrowed from Tiny Acorns as the kids love them so much. Colouring pages, wordsearch, a maze and word puzzles kept them all busy while they all sat and did them together amidst a pile of empty sweet wrappers!

Despite the huge amount of sugar they must have consumed, the excitement and worn them all out, and my boys were in bed almost as soon as everyone had left - full of excitement about the next day and Halloween part two! 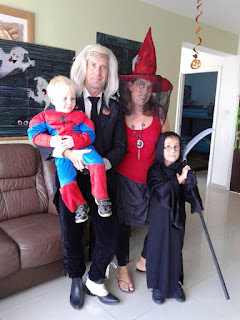