Agia Napa - not just for clubbing!

June 15, 2013
There's a large misconception that Agia Napa is just for party people and only comes alive at night.  It is true that it is a fab party place during the day it's a totally different place. Last Sunday a friend and I went for the afternoon and had a lovely time. While I often pop down there to see Aaron at work it's been a long time since I did anything else so it was great to and do something different.

First of all we explored the small church at the harbour, Agios Georgios. 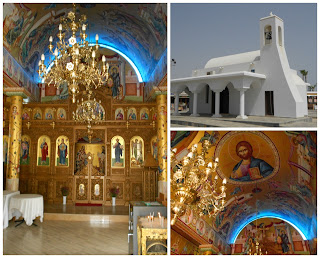 Leo was surprisingly interested in it and was comparing it to the big church he has been to with the school.  I pointed out the beautiful decoration and it was all going well until he started asking who all the pictures were and lots of other questions, I came a bit unstuck trying to answer all his questions!

Next to the church is a restaurant with a small playground so we popped in there for a sneaky play before walking around the harbour itself to look at the boats.  Leo was interested in the different types from the small traditional fishing boats to the large tourist 'submarines' and party boats.  He was desperate to go out on one and I told him we would go very soon with Grandad while Nana looks after Louka. 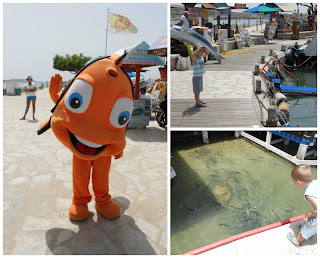 Leo and his friend Jack were excited to see 'Nemo' who was with the guys handing out leaflets for the 'Nemo Submarine boat trip'  I just couldn't believe he could survive in wearing that suit in the heat!

We stopped to feed the fish such a simple activity but something Leo has never done before. He was absolutely over the moon about it, fascinated how mad they all went as he threw the bread in, I think this was the highlight of his whole day!

We stopped for a picnic lunch near the water in a lovely little shaded area with benches and the boys had a run around playing ball for a while, until Leo randomly announced he was cold.... I have a temperature gauge on my pushchair and it was showing 35 degrees in the shade! 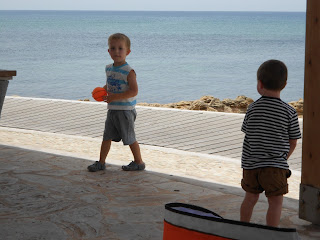 Heading back to the harbour we decided to stop for some frozen yoghurt at a new place that has recently opened which happens to have a great little play area right next door. The boys were not at all interested in the yoghurt, or even the sweets we'd put on the top, preferring instead to play leaving us to eat it all ourselves! 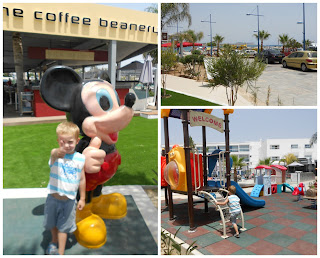 Next to the playground is  coffee bar, restaurant and a nice looking pool so I think we're be heading down again very soon.