An 'Amazing' Day Out at CyHerbia

April 28, 2013
Today we had a brilliant, 'amaze-ing' in fact day out at CyHerbia Organic Herb Gardens in Avgorou.. I'd only recently found out about the place via facebook and today they had an Easter Egg hunt in the maze.

CyHerbia has 9 themed herb gardens, woodland and Cyprus' only elevated hedge maze. It has a distillation room which although we didn't see today demonstrates the process of essential oil distillation and a tea room where you can sample the herbal teas and see the many herbs, and herbal products available for sale. 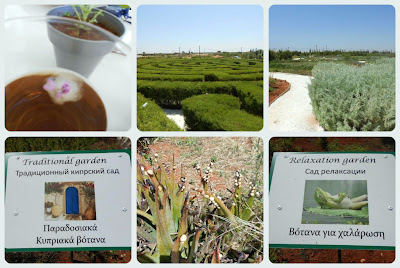 Today was a special Easter event (no, they are not late with it, we celebrate Orthodox Easter here in Cyprus so Easter weekend is next week!) and for €2 per child you could take part in an egg hunt in the maze, 'I-spy' in the herb gardens as well as some sheets to complete finding other things in the maze and spotting the Easter bunnies hiding in the gardens.

I think I may have been even more excited about this than Leo, not just for the event itself but for finding a well priced family attraction here in Cyprus. One thing that I do miss from the UK is the things to do that do not involve beaches, pools or pubs! So often we go to family events  and almost without exception I've been slightly disappointed, or at least full of things they could do to improve them, I know - I'm a hard person to please when it comes to stuff like this!

The event was advertised on facebook, and advertised well (first thing that impressed me! - there's not much that annoys me more than companies here which do not use facebook well, its not hard and its free!)   In fact I think it may have been advertised a little too well as I think they were surprised at the turn out of people!

We arrived early figuring that it would get busy,  so we (myself and my friend and her son) were into the maze not long after 10am. The boys were excited and set off eagerly to find 10 eggs each. Luckily my Mum was with us too as Louka was not impressed about being in the buggy so I ended up carrying him while she pushed the buggy. 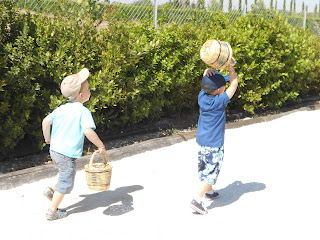 I loved the maze (I'm such a big kid!) although it's not something I'd fancy doing much later in the season as it was very hot in there, I was actually organised today though and for once we were all wearing suncream, hats and had water, well I might not have had a hat but you can't have everything! 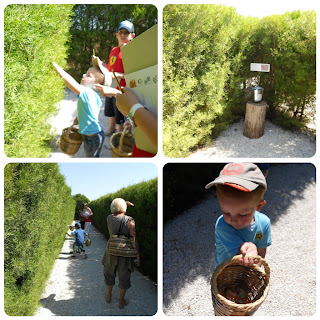 After the maze we stopped at the tea room for our free herbal tea, I wasn't expecting to like it as I've never liked any before but never one to turn down a freebie I gave it a go and was pleasantly surprised, even Leo drank most of his!

Feeling refreshed we headed out with our clipboards to the herb gardens for our 'I spy' game.  The boys were not very observant although once we pointed out the things we were looking for they then took all the credit!  The bunnies were well hidden though and I ended up cheating and asking a passing older child for the last name as our boys were getting tired.

The herb gardens are very well laid out and the boys enjoyed running round all the windy paths and asking us  to read all the signs telling you what all the plants were.

We stopped for a well earned lunch,  the menu is simple but in keeping with the attraction. Although they were very obviously overwhelmed by the amount of people there the lady in charge was lovely (and much calmer than I would have been!) They apologized for the delay, and the fact they had run out of some things and although we did wait quite a while it was not a problem as the boys were happy running about in the garden and playing games at the table.

The food was good when it arrived, and when we came to pay they knocked a little off the bill as an apology for the delay - lovely bit of customer service in my book!

After lunch we went for another trip round the maze, this time without the egg hunting to find the viewing platform we'd missed the first time. Using Aaron's theory of following only one wall so as not to get lost we were not in there as long this time round, good job really as we were all very hot and tired by now!

All in all, it was a fab day and we're certainly be going back another time.

By the way, this post is not sponsored in anyway - Cyprus hasn't got that idea yet ;)   I just thoroughly enjoyed our day and wanted to spread the word!

Linking up to Country Kids at Coombe Mill