It's been tiring, and stressful with two poorly boys and it's been the first week in probably 2 years that I haven't blogged!  I'm pleased to say they do seem to be on the mend now and hopefully we won't have to spend another couple of days at the hospital this coming week.

I am pleased though that despite the lack of blogging I have still managed to take at least one photo each day, so I've passed the point that Aaron thought I'd get to! 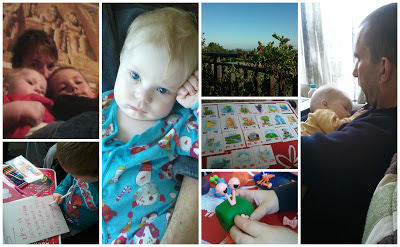 Obviously there hasn't been much going out which hasn't helped and Leo is going a little stir crazy now (as are we).   We've done puzzles, read books, watched DVD and made playdough funny faces.   This morning he declared he was Spiderman, and with Daddy's help he insisted he had to write a notice.

'Leo is Spiderman, If somebody is in trouble ring the bell and Leo will come'

So, here's hoping for a slightly more interesting week coming up, and more sleep!

365 project Week that was