- October 05, 2012
Last year Leo and I went to the 3rd birthday party of my friend's daughter at our local soft play place.  As part of the party package the kids had a visit from Barney the Dinosaur.  I wondered how Leo would react to him,  he watched Barney regularly on TV (I can't stand the annoying purple thing myself but there is little else on Arabic TV!)  but I thought it might scare him in real life.

As Barney entered I picked Leo up and said 'Look Leo, look who's here?'

I asked him if he wanted to go over and see him and he nodded at me, eyes wide with amazement.

At this point most of the other children were trying to get away from him, and were either crying or hiding behind their parents. I slowly walked over with Leo and Barney gave him a wave, Leo didn't wave back but instead held his hand out to give him a 'High five'.  A few of the other children had a cuddle from him, I thought that Leo,being the youngest there would not want one but as we got close enough he held his hands out to him for one! 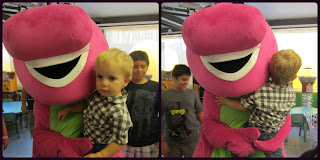 He was so taken with him and made me follow him around the whole time he was there.  He talked about him for ages afterwards, always saying 'Barney came to my party and gave me a cuddle'   He didn't quite get that it wasn't 'his' party!

That was last October and after not mentioning it for months he asked in the run up to his 3rd birthday if Barney was coming back.  I wasn't sure what he was talking about at first but when I realised I had to explain that he doesn't come to every party!

It was so cute how pleased and amazed he was to meet him, especially as Barney was not one of his 'favourites'   I can't imagine how excited he would be if we actually saw Thomas the Tank Engine!

Linking up to Flashback Friday