- May 18, 2012
Every now and again I find myself in a period of time where I am waiting for something, unfortunately I'm not that good with waiting being as I am probably the most impatient people I know!

2009 was a year with a lot of waiting in it, it was a year full of changes and uncertainty for us.

I left my old job at the end of February, taking maternity leave at the earliest possible point after several months of debate about redundancy or big changes in the office. Leo was due on May 16th and finally made his appearance 2 weeks later on May 29th at the very last minute before induction so I had a long time off work to prepare for his arrival - which basically meant watching rubbish daytime tv, having reflexology sessions, afternoon naps and ordering my grocery shopping online with an occasional meet up with friends for good measure.

Aaron was working for himself and was home often by mid afternoon, and as we were living with my parents I didn't even have to clean the house  (Mum cleaned, I cooked)   So although it was a long time off work I was having a ball, the only time I got fed up with the pregnancy was in the last 2 (overdue - I don't DO late!) weeks.

Our apartment in Cyprus was due to be completed on May 30th, which then became the end of June.  When Leo was 5 weeks old Aaron flew out to collect the keys and make sure all was ok.  At this time we had no idea when we were going to actually move but we gradually packed everything up and constantly talked about when we should do it.

Because of that I could never really settle into motherhood as I might have done otherwise. I went to a few Mum and baby groups but it seemed so pointless making friends to be possibly leaving them so soon. It was hard not knowing what was about to happen. 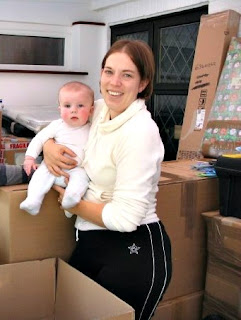 In the end due to Aaron's work becoming scarce we decided to go for it in November, which was 6 weeks away at the time, Leo turned 6 months old after 5 days in Cyprus.  This was the start of a new and different kind of 'waiting' - waiting to get into a new routine once Aaron found work, waiting to feel settled in our new home and make new friends.

It was an eventful and strange year, and although I miss the easy first pregnancy / early baby days (with just the one child to look after!)  it's not a year I'd really like to repeat!

This post is for my Flashback Friday, this week the theme is 'Waiting' but feel free to just go with whatever takes your fancy if you have a memory you'd like to share! If you'd like to join in you can read all about it here. If you wish, grab the code for the badge to display on your post, the important part though is to come back and add your post to the linky, then visit some of the others for a lovely nostalgia fest!

Grab my button
and join in


Next week the theme is a great one.... Party!    So get searching through the archives and see what you can come up with!
Flashback Friday pregnancy waiting