- December 21, 2011
This week brings us the last Gallery of 2011, and the prompt is Christmas of Yesteryear. I was quite excited when I saw this prompt last week as it would give me a great excuse to look at all the old Christmas pics, except then I went and forgot all about it!

It's lucky really that I knew exactly which photo I wanted to use... 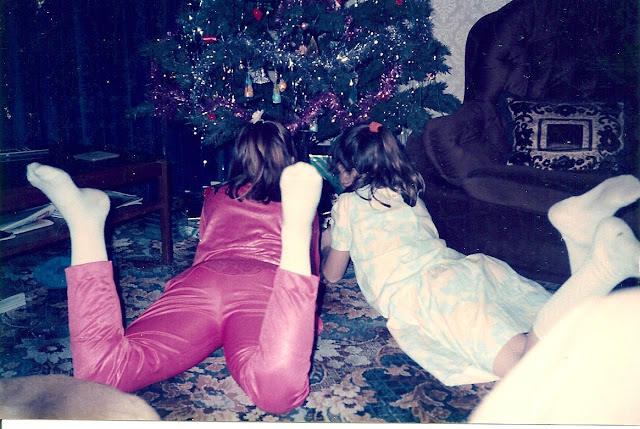 This was taken in 1986, of my friend and I caught having a sneaky peak of the presents under the Christmas tree! Unfortunately I'm the one in the rather unpleasant pink trouser suit, I'd like to blame that on my Mum but I have a horrible feeling that I used to love that outfit!

I used to drive my Mum mad by constantly poking and prodding the presents under the tree, I used to spend ages trying to guess what they were but I actually never wanted to find out!  One year I had accidentally come across a present of mine hidden and after a second of being really pleased I was getting what I wanted felt quite disappointed that I knew before the day!

My presents from 'Father Christmas were placed into a pillow case and left at the end of my bed but in the run up to Christmas one or two from my parents were put under the tree along with those for the rest of the family.  This came about after the year I wondered why everyone else in the family had a present under the tree except for me!

Even when I realised where all the presents came from I insisted on most of them being kept hidden until the day - I knew I wouldn't be able to resist picking them up to have a feel and I didn't want to work out what they were.

I can remember very clearly laying under the tree with Catherine in the photo above - she was a much better guesser than me (she unwrapped her presents one year when her Mum was out and tried to re-wrap them!) but even she didn't know what it was that I was getting,  I don't remember what it was that particular year but they were always good, and made better by the fact they were surprises!