My favourite time of year - #R2BC

- October 01, 2019
It seems rather strange to be writing a blog post about about autumn when it's still around 30 degrees  but it is now October and therefore it must be close!

The boys are back at school of course, although it doesn't feel as different as in previous years now they walk there and back by themselves.  They have not yet had there timetables for the year and homework is very little when they actually have any!

We have still been using the pool but there is a distinct chill to it now that doesn't wear off after a length.  I was in last week but there is a chance that might be my limit now for this year.   Louka thinks it's freezing, Leo is still powering on trying to convince us all it's lovely.

I have been enjoying going down there though and being able to sit in the sun,  in the height of summer I do all I can to get out of it and find the shade.

I love this time of year in Cyprus, the temperatures start to drop  - it's still hot enough for the beach but no need for the air con in the evening.

The nights are drawing in but it doesn't bother me at all, not like it did back in UK where it played on my mind every day as I realised how early it was getting dark.

I don't even mind the darker mornings, we are treated to lovely sunrises this time of year, and I've been getting up earlier to do a little bit of yoga before starting work.

The summer season still has 4 weeks to go, so everything is still open but it's a little quieter everywhere.

All the seasonal workers are tired but powering through now the end is in sight.

I love to hear everyone making plans for 'the winter'  meaning any time from November onward, maybe holidays, home improvements,  catching up on TV box-sets, and meeting up with friends you've barely seen for months. 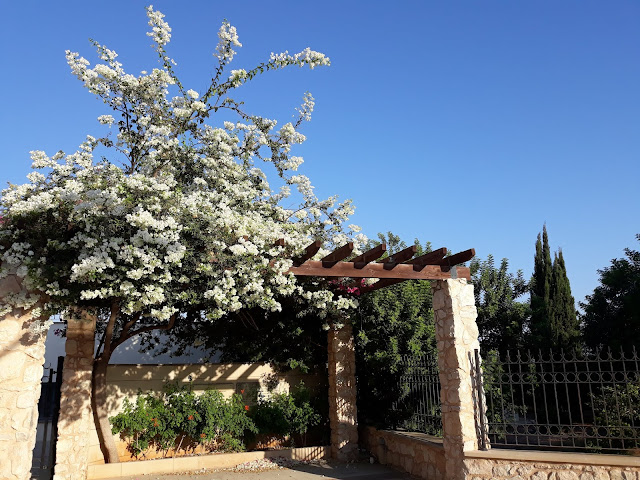 We spent a lovely afternoon in the park on Sunday with friends,  the municipality was holding a Sports Event #BeActive for the European Week of Sports.   The kids played and joined in with the different activities,  including tennis, chess, table tennis, and archery,  as well as watching various demonstrations by local groups.    They also enjoyed an ice cream, and we had a beer sat in the shade of the trees - perfect!

I'm also looking forward to next month too when we are going 'Glamping' for a night (the boys first 'holiday') with friends.

And it's my birthday in under two weeks! Autumn Cyprus Reasons to be cheerful