- September 18, 2019
I love a party when I get a theme I can work with and Leo has given me some great ones over the years,  Harry Potter, Star Wars and my favourite.. Doctor Who.

This year Pokemon was his choice. 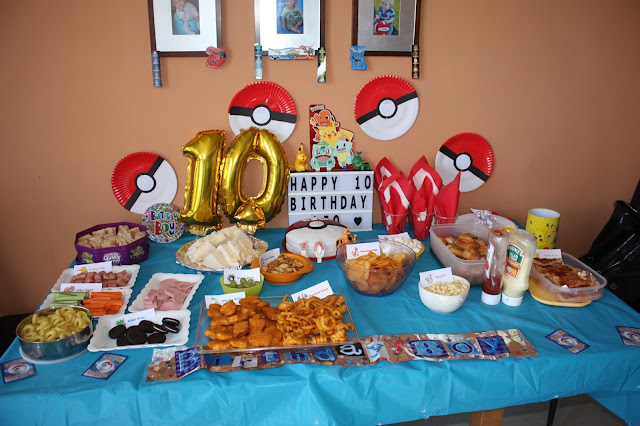 I'm not a Pokemon expert but we had been playing Pokemon Go for almost a year by the time of the party, on the way to and from school and on adventures out and about.  It's a great way to get two tech obsessed boys (and their Mum!) out and walking about.

Because of that, and of course aided by Pinterest I was able to come up with lots of bits to suit the theme and have a very happy birthday boy.

I didn't go overboard and apart from buying new bits to make the Pokeballs I recycled what I already had, hence the fact we had a blue tablecloth. Ideally I'd have got one red and one white to make a Pokeball table but I do try to draw the line somewhere.   I like to think I'm enthusiastic rather than obsessed!

When it comes to crafty homemade decorations they have to be simple,  either because I'm not great at crafty stuff, or I have to convince Aaron to do them and if they are overly complicated he would not be impressed.

So, using red and white paper plates we made Pokeballs,    very simple  - Cut the plates in half, with some black and white paper, add the stripe and the smaller circle and glue together - Easy!

I stuck a few Pokemon pictures around that I'd printed or saved from packaging and used the figures that the boys had on the table.

Leo loves the little food lables that I make for his parties and really looks forward to seeing what they are going to be. 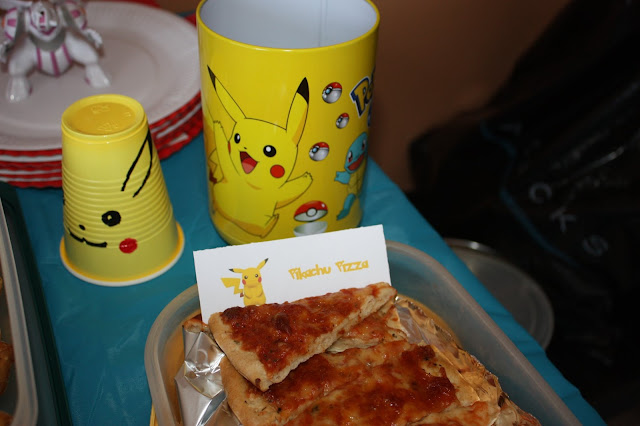 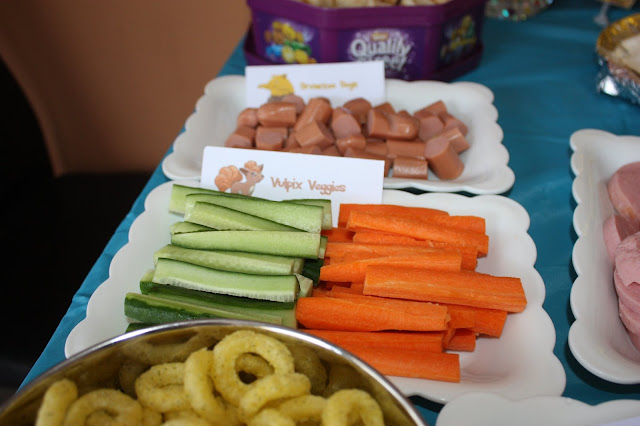 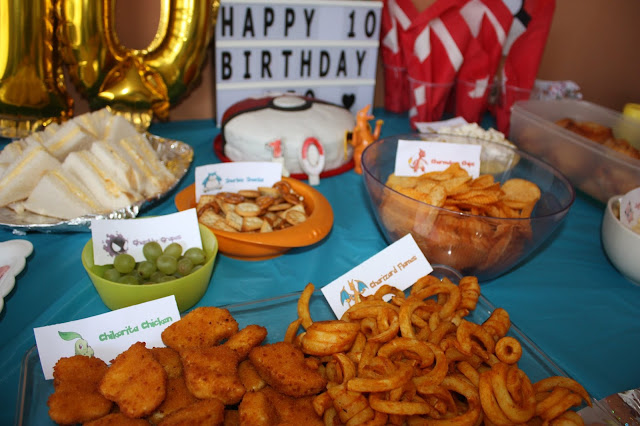 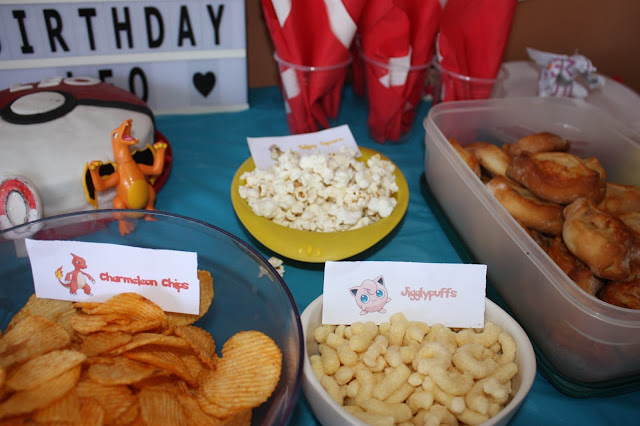 I thought this was going to be tricky as half the kids are getting a little old for games, they want to do them but also they say they don't.  The younger ones like them but it wasn't their party.

We went with the old favourite - Pass the Parcel.    Followed by Leo's request of Hanging Doughnuts,  a game we have only ever played at Halloween but who am I to argue with a simple birthday request.

To give it a Pokemon theme I (badly) attached a little but of red icing in an attempt to make them look like Pokeballs.  The kids got the idea and were more than happy as they got to eat doughnuts. 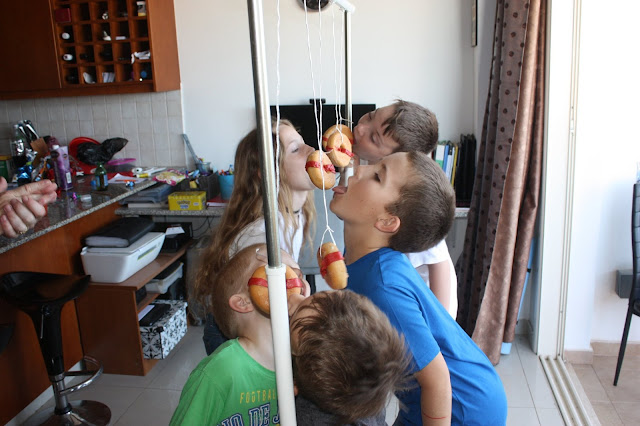 I had ordered a pack of mini Pokemon figures so the other games were all based around collecting these to take home - Gotta catch 'em all!

I put some inside balloons that they had to pop,  I used more balloons to make frozen balls with figures inside, this went down well as they threw them against the ground to smash the Pokemon out.

I saved the best for last,  it's a task / experiment that they have done many times before now but it still goes down a treat as long as it has a different name. Introduced to us by Tiny Acorns Creativity, over the years they have done Fizzy Minons, Moon Rocks, Potions Class and exploding volcanoes to name just a few.

This time it was Pokemon Eggs,  now I'm not such an expert that I know which Pokemon are rare, legendary etc but I do know you get different coloured eggs (well you do in Pokemon Go, I've got ni idea about the cartoons)

So we had green and purple with various Pokemon hidden inside that needed to be hatched. 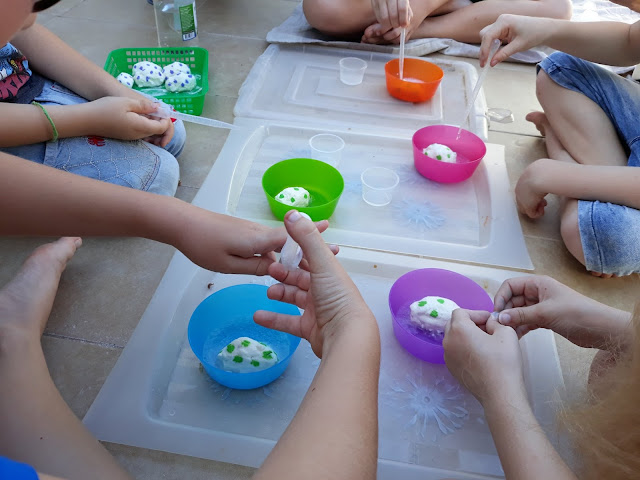 They are very easy to make,  a few days in advance just mix bicarbonate of soda with a little water and shape around the figure.  Leave to harden and then paint the spots on.


No birthday is complete without a cake.
As usual baked by me and decorated by Aaron. 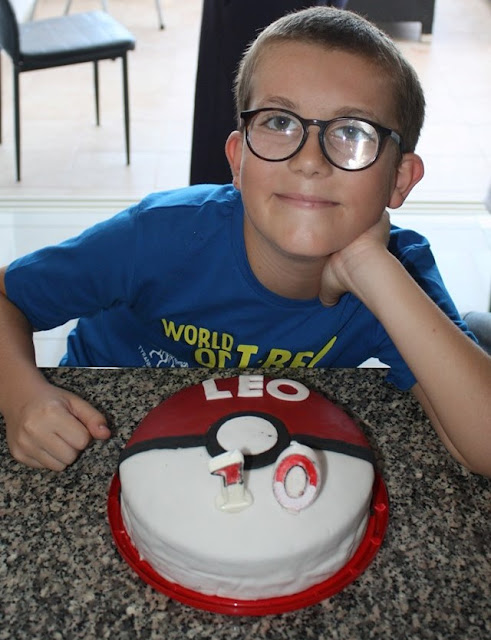 It was a successful party and loved by all, especially and most importantly, the birthday boy himself!
birthday birthday cake birthday party party theme