- December 11, 2011
Last weekend was Leo's first bit of Christmas excitement, as he got to meet Father Christmas twice. I took him to see him last year but he was a little underwhelmed to say the least back then, (I didn't even write a blog post about it!)  and although he didn't cry at all the whole experience pretty much went over his head!  This year he understands who he is meeting, even though he doesn't get the whole 'presents coming at Christmas thing  - I've deliberately not mentioned too much about that as if I tell him Father Christmas will bring him presents he will just want them RIGHT NOW. 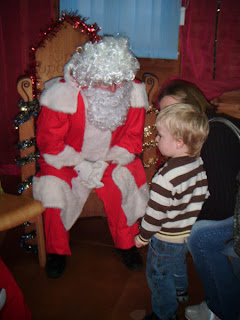 The first meeting was at the school on the army base's Christmas Fayre. The excitement started when Father Christmas arrived waving to everyone from the top of a fire engine with sirens blaring, We then queued with his friend (who's five) and he saw him go first so that would have encouraged Leo to do the same.

Leo was a little unsure but walked in holding my hand and then randomly asked Father Christmas to give him a 'High five'  When asked what he wanted for Christmas he said he didn't know but he nodded when told he must be a really good boy and then he will get some presents on Christmas day.   He took his gift and said 'Fanks Cissmass'

He left the grotto clutching his gift  - a lego 'alike' toy for age 6 and above which I swapped with a colouring book won from the tombola when Leo wasn't looking, (may have been a small flaw in the sorting out of the gifts!)

The Farye was more enjoyable than the year before as last year he had not been walking long but also was not happy in a buggy, this year he was really happy to be given some money and pay the lady for a go on the games!

We had a good haul between us, although I lucked out a little... encouraged by my parents and Leo's run of luck on the tombola (biscuits, tinned hot dogs, Christmas pudding, chocolates, colouring book, pencils, more lego) I had a go and won a large tin of rather dubious looking green beans, although I did manage to do a swap with my Dad for his Oreo cookies!

Being on the army base it felt just like being in a UK primary school, although I'm thinking they wouldn't have had stalls outside!