- December 06, 2011
One of the things I always enjoyed as a child in the run up to Christmas was doing the pre-Christmas baking with my Mum. Mince Pies, and Cheese Straws are the ones that stick in my mind, along with decorating the Christmas Cake with the ancient plastic Santa, holly and robins.

It's only in recent years that I've decided that I like mince pies but apart from a couple of years when I left home I've always made them, it just doesn't feel like Christmas until I've made them now. Fortunately now I like them too I can actually eat my own cooking!

Although I enjoy cooking, it's taking a while for me to enjoy cooking with Leo but he enjoys it and I want to involve him so I split my baking into two parts. He helped me make the pastry in the morning and I left it to chill until he had gone to bed before I made the pies.

You can tell I'm getting old as I had actually planned to go to the pub with Aaron the night I made these but turned down my parents babysitting offer to stay home and bake, what is the world coming to! 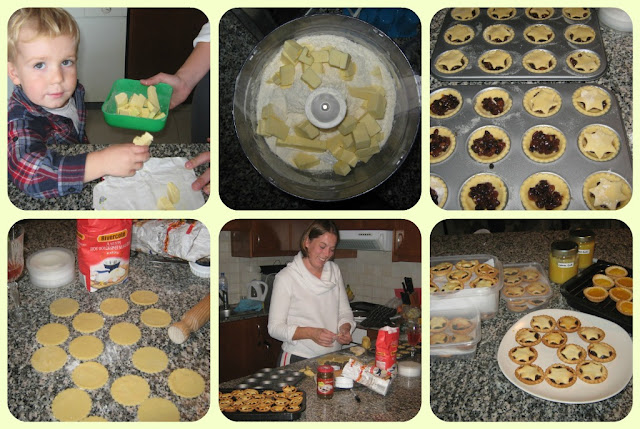 Once Leo had gone to bed I opened the wine and put the Christmas CD on - one reason why I did it when Aaron was at the pub as he tells me off for starting Christmas too early. When the first batch was in the oven I rang my parents and invited them to be offical tasters and join me in a glass (or 3) of wine.

I have no idea how many pies I made, I know it was 6 batches of pastry (I made 3 lots but I doubled the ingredients each time)  - It was a little bit like a production line, and we *may* have tried several on the way from the cooling rack to the storage box so I gave up trying to work out how many were cooked!

I've never made my own mincemeat so I used 3 jars in total, next year I think I'll try making my own.  I was going to post the pastry recipe but I'm not actually sure which one I used now, but it's not rocket science, just sweet pastry so I'm sure you could figure it out!  I also made some tarts with my home-made Lemon curd as I thought Leo would prefer those - and they are yummy!

So I now have a whole shelf in my freezer of mince pies but I won't be eating them all - it should keep my Dad happy till New Year at least. I'll just make sure I keep one back to leave out for Father Christmas.
Christmas cooking Creating Christmas